Ever wondered what happens to old school buses? You probably haven’t, but now that I’ve got you thinking, here’s your answer: old school buses from America get brought down to Guatemala, are given extreme makeovers, and become part of the city’s public transportation system.

These “chickenbuses” traverse the roads in Guatemala City and its suburbs constantly, and they come in an amazing variety of colors and styles.

Check out these photos, taken in just one outing into the city (I am building a collection). This is only maybe half of the buses I got photos of today, and I probably saw at least three times as many color combinations: 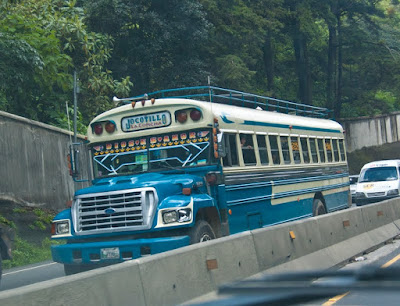 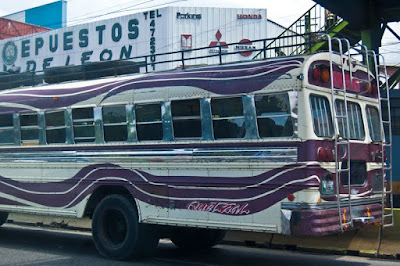 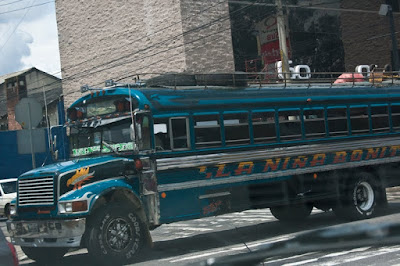 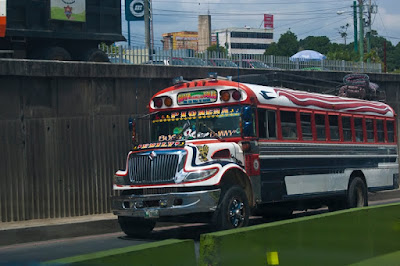 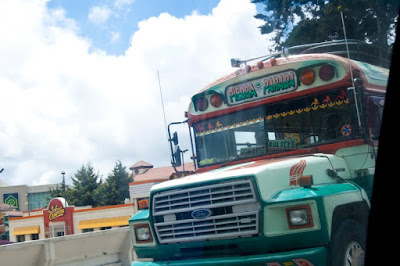 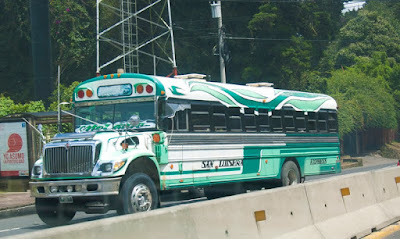 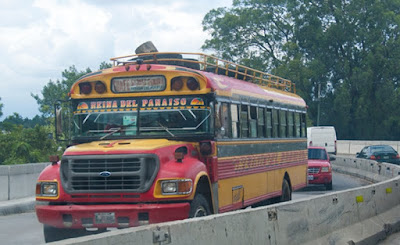 Oh and this one is pretty ridiculous: 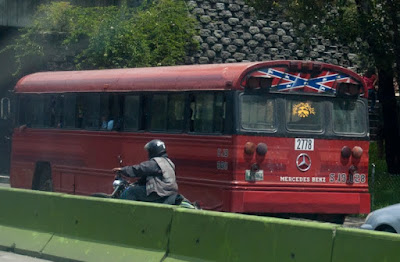 The all-red buses like the one above aren't as visually interesting, and they only serve the heart of the city, but I can't get over the choice of combining a Mercedes Benz logo and symbol of Christ with the Confederate Flag. Spot on, Guate!
Posted by Unknown at 11:24 PM 2 comments:

These are two panoramic shots that I took on the trip Raul and I took to the stables (the Polo Field) where he picked up the horse trailer and also ordered some trucks of sand for his field at the farm.
The top shot was taken on the drive back home. The field itself is low in the valley and right near lake Amatitlan, so to get there you have to drive down a winding mountain road and go through a small village. There was a lookout spot at the top of the climb back into Guatemala City, so I stood there, snapped 7 quick photos, let Photoshop do its Automerge thing, and voila.
The bottom shot is actually taken from the Polo field, and is 5 shots stitched together in Photoshop.
In both photos, the tallest peak (on the left hand side, always capped in clouds) is actually Pacaya, the volcano that I climbed the first weekend and that erupted back when I first visited in May....
Posted by Unknown at 12:15 PM No comments:

A meet invitation I designed for the upcoming "Copa Quetzal/ Quetzal Cup" this May 2011, hosted by GIC and Olympika (the gym I work for): 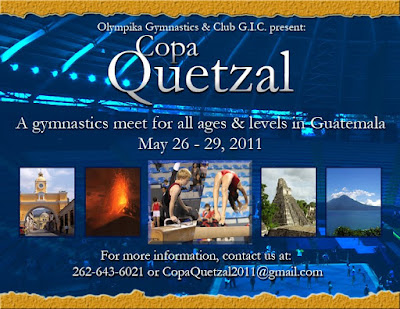 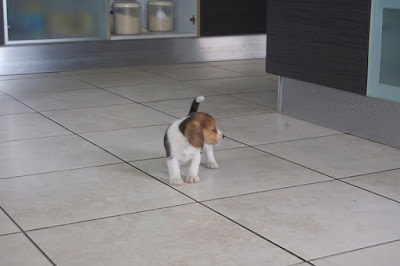 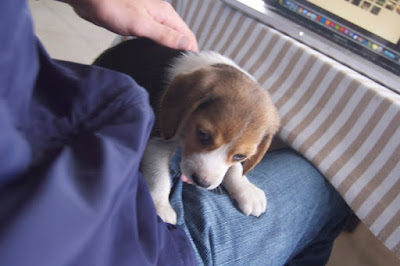 The newest member of the Molina household....
Posted by Unknown at 3:49 PM No comments:

I was researching some Mayan mythology (specifically, seeing what I could dig up on Mayan Monsters) when I came across this "escuincle" (which is more Aztec than Mayan.) There are some who think that this sculpture (of quite an ugly species of dog) has the human-mask-face on it to represent the concept of Shamans who could transfer their souls into animals: 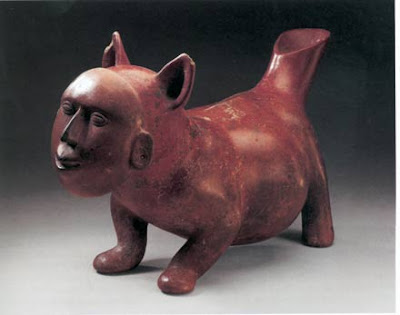 I was stunned at the similarity to my own creature, "The Sphinx," which I created about 7 months before ever seeing the Escuincle: 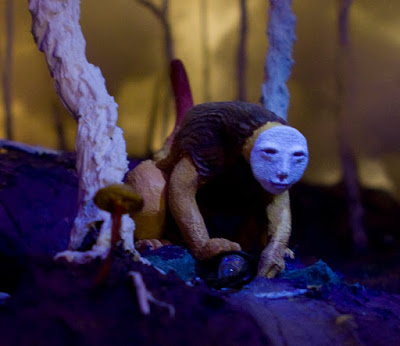 A pretty cool coincidence I think for my crimson-tailed creation to look so similar to a pre-Columbian sculpture from the Oaxaca valley-
Posted by Unknown at 7:54 PM No comments:

I can still draw (kind of) 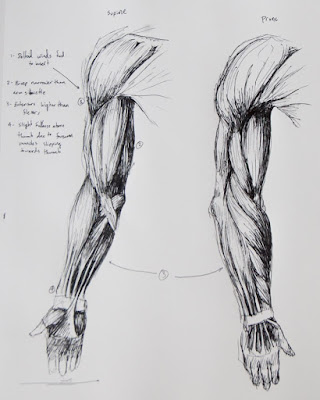 Arm (Supine and Prone) study from Anatomy for the Artist
Posted by Unknown at 12:38 PM 1 comment:

My Spanish is slowly improving- I usually pick up maybe 10 new words a day. I feel like pretty soon I will be able to at least coach very well in Spanish (already I am pretty decent, though I use cave-man Spanish... lots of imperative verbs and single words: "Run!" "Round off!" "Watch me" etc....) Combining that with some gestures, I have been able to get my point across maybe 75% of the time.

I worked with the boys class/ team all day today by myself (for the first time!) without too many problems. Of course, half these kids at the gym know English anyways (at least a little) so I usually have a translator or two by my side to help me out.

I also got to train this morning with Mynor for the first time (at the Guatemalan National Team training center.) That was pretty cool; I hope to get down to their gym a few times per week. It's in the city, though... and driving in the city is freaking nuts....

I am starting a couple of different graphic design projects for the gym here and, in other news, just submitted my first real-person grant to the Arts and Sciences Council of Charlotte, NC (I'm trying to get my dioramas in a permanent home, like a library.) Fingers crossed that I get the money, though I doubt I will - as an emerging artist who is not accustomed to writing a grant, I don't think anything will come of it, but I guess you have to start somewhere....
Posted by Unknown at 11:00 PM No comments:

This past weekend was real cool and kind of crazy. My friend Phil down here has a motorcycle and we decided to take the weekend and get out of the city, thinking that climbing Pacaya, the volcano that erupted back in May, was the best option. Hopping on his motorcycle (yeah, we wore helmets) we drove about an hour till we got to the volcano.
The ride was pretty cool - one of the advantages of being on a motorcycle is that you can weave your way through standstill traffic, saving a lot of time. One of the disadvantages though is that you get wet if it is Guatemala's rainy season, which it is, so we got wet.
Still, we made it to the base of the volcano without getting drenched, purchased our entrance fee and hired our (required) tour guide for a total of about $12.50 a piece. On the uneven and rather strenuous hike up the volcano, our guide, a 15 year old kid who looked about 13, pointed out various signs of Pacaya's recent eruption – large chunks of rock that had spewed from the crater, bashed in tin roofs, and trees, which had been stripped of their vegetation by the fires: 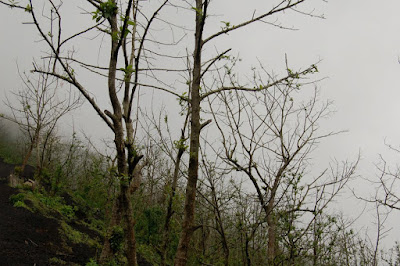 Without warning, the trees gave way to a rocky, very uneven landscape of solidified ash/ lava – in the picture below you can see the end of the tree line in the fog on the right (this dog had followed us all the way up): 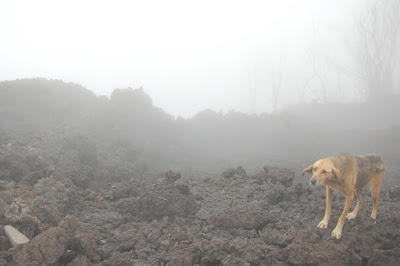 Walking out onto this landscape was kind of surreal – looking ahead at our guide, I felt like we had Gollum showing us the way, except that this kid wasn't schizophrenic: 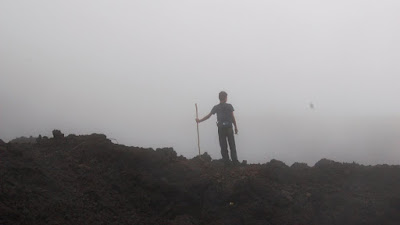 The ground was uneven, sharp, pourous – layers upon layers of dried lava. In certain places, if a hold in the ground went deep enough, it was easy to start fires simply by holding a stick in the gap between the rocks, and letting the heat underneath ignite it: 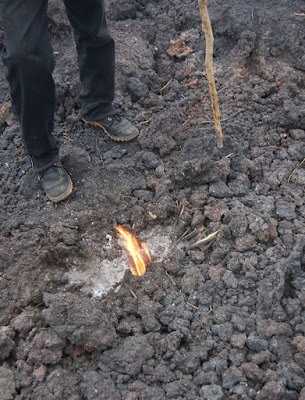 Once we got a decent fire going we roasted some marshmallows, feeding a few to the dogs that had followed us (for that very reason) the entire way up: 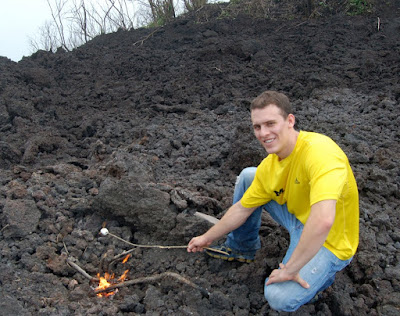 Once the fog cleared a bit, we got a good view of the crater (the little trails of smoke on the right are not fog, but from fires up near the crater): 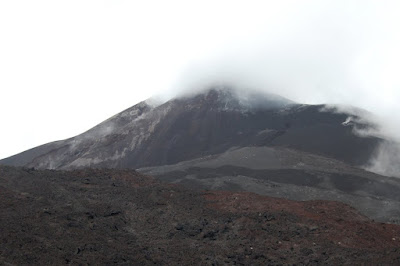 Though we couldn’t go nearly as far as people were able to before the eruption, and though there was no visible lava like there was said to be previously, it was still a really cool, unique experience that was worth every bit of the cost.
Afterwards, we drove to Antigua, met up with Phil's cousins for dinner/ drinks, and got a 2 bedroom room at a hostel for $5 a piece. It was no five-star resort, but for a private room and shared bathroom/ computer with internet/ resident golden retriever, I'd say it was a great deal. Nothing crazy to report in Antigua though, except that the drunks pee anywhere, in any direction, so you have to watch out.
Posted by Unknown at 5:47 PM No comments:

So a couple of pictures of where I live. This is my room (created from 3 images with Photoshop's photomerge tool. Sweet!):

Usually, each morning I get up and go read a little bit with a great view of the mountains: 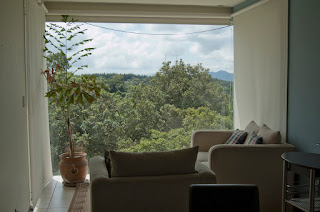 The maid usually makes breakfast for me while I'm reading. It's awesome. She's very nice and doesn't speak any English, but I've already improved my ability to communicate with her (I'm glad that I can thank her properly now and not feel like a dumb tourist simply yelling "Grassy-ass!" for example).
Also - I am happy to report that I got ahold of my suitcase, bought a cell phone (for under 30 bucks!), and have helped coach at the gym twice now. So I feel properly settled. My Spanish is improving quickly, especially for coaching, but a large number of the kids at the gym also speak English! So while it helps having several translators in any one group, they are also as eager to practice their English with me as I am to practice Spanish with them. Maybe not quite the "immersive" environment some get, but still very very fun....
Posted by Unknown at 2:12 PM No comments:

After one flight cancellation, some scrambling to get on a flight at the last minute – where I dropped my water bottle straight onto a man’s head while loading my bags overhead while dripping with sweat from running to the gate – I made it to Guatemala, although my suitcase didn’t. We’ll have to go pick that up from the airport if it comes today.
I had originally reshuffled a bunch of clothes into my carry-on bags so my suitcase would make the 50lb weight limit, so luckily I’ve got a complete change of clothes on hand to tide me over. Thanks for your packing skills, Mom.

It was very rainy last night on the drive back to Raul’s house (where I’m staying). On the way, a fallen tree (from the saturation in the ground) almost blocked our path and had pulled down the phone lines to our neighborhood. I asked Raul if this kind of thing happened often because of the landscape/ rain combination. “Only when you’re here,” was his reply, referencing the mudslide from my first visit: 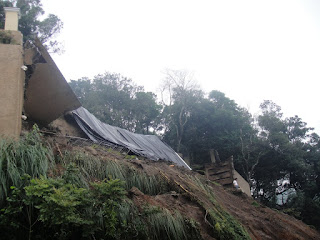 Apparently my presence exacerbates the natural disasters of the country? Not awesome-

Anyways, I will spend the next few days getting situated – doing things like buying a cell phone, going to the gym, and retrieving my suitcase.
Posted by Unknown at 3:15 PM No comments:

The summer has been slow. Real slow. I guess that was what I needed - time to really soak in college life before turning into a "real adult." Now that I am one, and still have no idea what to do with myself, I've decided to move to Guatemala, where I'll be coaching gymnastics through the end of November. With such a big change of scenery, I'm going to use this blog to update everyone as I attempt to get a handle on life in Central America. I anticipate my posts will be a mixed bag of stories, photos, and artwork... basically, anything that happens as a result of my time down there that I think is worth sharing.
Most of you reading this know that I went to Guatemala back in May for a brief visit. My four-day stay turned into 9, thanks to a volcanic eruption that covered the city in ash and a tropical storm that caused mudslides and a sinkhole in the middle of the city. This perhaps worked in my favor, with the delay giving me more time to convince myself that this is an area of the world that I'd like to "figure out" as best I can.
(images from my first trip):
I will be staying with my host Raul, a graduate of the UofM gymnastics team in 1995, and his three kids here: 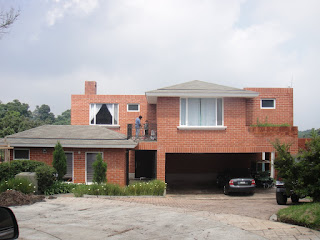 I'll probably be coaching level 3/4 team girls. Here's a picture of me with some of them: 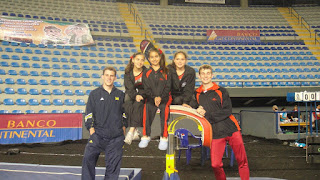 This is the gym I'll be working at (the floor is a really good spring floor): 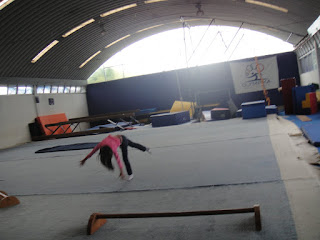 Posted by Unknown at 8:07 PM No comments: