The Fall of the Sun, Final 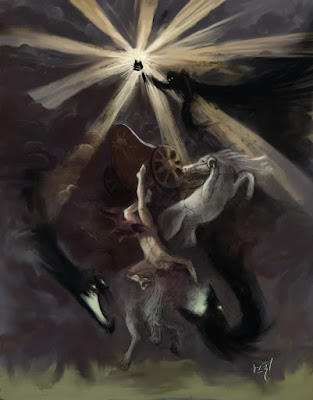 TED talk for tonight was Oliver Stacks on visual hallucinations in people that have gone blind.

Progress update on this digital painting. I hope to have it done tomorrow night. Corel Painter helped a bunch to render out the clouds and give it more of a painterly look (compare especially the left side of this version to the previous post of it).... 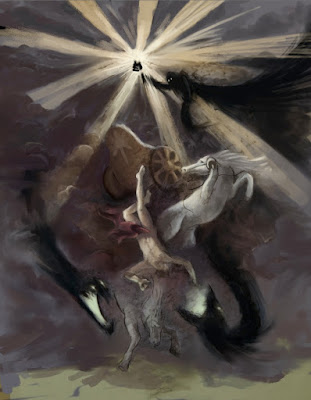 Posted by Unknown at 9:56 PM No comments:

Another TED talk: Scott McCloud on Comics. If you don't want to watch the whole 18 minutes, jump to the last 5 minutes or so. His ideas about the infinite, digital canvas and the possibilities to reshape narrative and visual spatial relationships are great.
Posted by Unknown at 11:38 PM No comments: 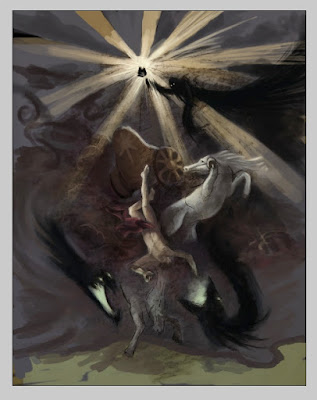 ...But the rest of it is coming together alright.

Goal: to have this piece and two other similar pieces finished by Monday, September 28th.

Today I went to the Dude to see what kind of resources UofM had for lighting. Of course, I was not disappointed. The tiny door to the 'video studio' opened into a massive, warehouse style auditorium with an extremely complicated, fully movable hanging light system. The man showing it to me has done lighting design for Aerosmith and Santana, and the studio coordinator regarded him as one of the "best lighting designers in the country."

In fact, these studios were a little too advanced for my needs- while I am hoping to test out 3 point lighting systems and experiment with using shifts in light to imply different tones/ moods/ blah blah, you have to have a much more justified - and direct - reason to use a huge studio like that. Plus, they said they don't really have the capability to light small things (they got really hung up on the word 'diorama' when I mentioned it, and I had to keep reminding them that any experience with lights would be OK with me).

Still, I should be able to check out one of the small "soft boxes" and do a little tinkering on my own....
Posted by Unknown at 9:13 PM No comments:

1st- The TED talks are sweet. They have a theme called 'master storytellers,' and JJ Abrams delivers an awesome talk on the power of mystery and imagination in storytelling, using his own personal narrative.
My favorite quote from the talk: "Mystery - which might be more imporant than knowledge...."
2nd- From studio, today: After a quick warm up (drawing large), I decided to bust out the watercolors. I'm still trying to generate some ideas, though the overarching story is forming itself. At least, it makes sense in my head anyway. Here are a couple of doodles from the day (I forgot how much I like watercolor): 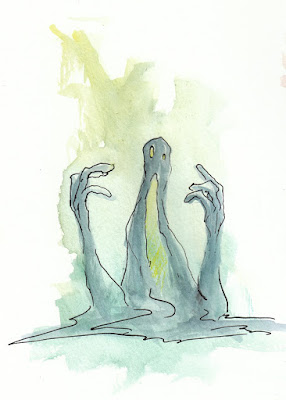 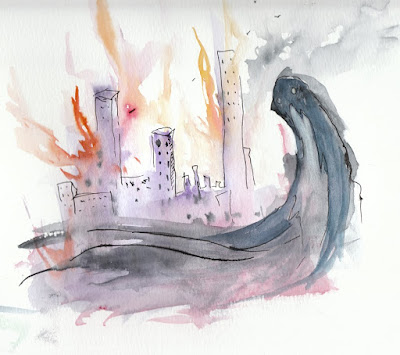 I did a third (that was more figurative) but I overworked it with pastels afterwards....
Posted by Unknown at 8:45 PM No comments:

(image from the NY Times)
A fascinating article from the NY Times about Carl Jung and his 'Red Book,' a narrative dreamscape that Jung recorded feverishly as he delved into his own psyche.
The book is being released on October 7th. This is one kind of narrative journey I myself want to dive into (on some level)....
Select quotes from the article:
For about six years, Jung worked to prevent his conscious mind from blocking out what his unconscious mind wanted to show him. Between appointments with patients, after dinner with his wife and children, whenever there was a spare hour or two, Jung sat in a book-lined office on the second floor of his home and actually induced hallucinations — what he called “active imaginations.” “In order to grasp the fantasies which were stirring in me ‘underground,’ ” Jung wrote later in his book “Memories, Dreams, Reflections,” “I knew that I had to let myself plummet down into them.” He found himself in a liminal place, as full of creative abundance as it was of potential ruin, believing it to be the same borderlands traveled by both lunatics and great artists.
Jung recorded it all. First taking notes in a series of small, black journals, he then expounded upon and analyzed his fantasies, writing in a regal, prophetic tone in the big red-leather book. The book detailed an unabashedly psychedelic voyage through his own mind, a vaguely Homeric progression of encounters with strange people taking place in a curious, shifting dreamscape. Writing in German, he filled 205 oversize pages with elaborate calligraphy and with richly hued, staggeringly detailed paintings.
...[T]he book was a kind of phantasmagoric morality play, driven by Jung’s own wish not just to chart a course out of the mangrove swamp of his inner world but also to take some of its riches with him. It was this last part — the idea that a person might move beneficially between the poles of the rational and irrational, the light and the dark, the conscious and the unconscious — that provided the germ for his later work and for what analytical psychology would become."
..."I should advise you to put it all down as beautifully as you can — in some beautifully bound book,” Jung instructed. “It will seem as if you were making the visions banal — but then you need to do that — then you are freed from the power of them. . . ."
Posted by Unknown at 5:31 PM No comments: 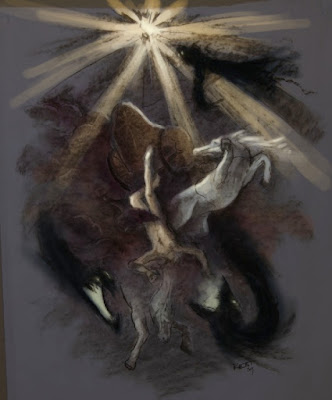 Quick color study to try and get at a particular atmosphere....
Posted by Unknown at 10:50 AM No comments:

Some random observations before I forget them (I'll keep it brief), and then a picture.

1. I like the concept of Yin/ Yang
2. It's important to understand the fundamental connection between two seemingly opposite things (like Light/Shadow or Good/Evil)
3. Norse Mythology, while containing many aspects of good/ evil, seems defined by an overarching cyclical order-->chaos--> order, with the idea that the Norse gods represent civilization, the Giants represent the untamed forces of nature (chaos), and that in the end, these giants will fight the gods, and win.
4. It's also important to understand the words you're using. I think I need to shy away from "myth." That has too many connotations of falsities/ untruths/ urban myths.... 'Mythopoeia' is a better word. Yes, mythologies are 'false' (the sun is not pulled in a boat across the sky). But perhaps storytelling, like art (and storytelling is really just a subset of art, of course) is meant to "use lies to tell truths." Picasso said something like that once....

Speaking of sun myths, I have this idea floating around in my head of a world built around Light and Shadow that is slowly being overcome by the "Shadow" side of things. This means the major lights of the world are going to be overthrown. Since I'm doing everything allegorically here, the Sun of my mythopoeia doesn't have to be a heavenly celestial body, but can be, say, a man riding a chariot across the sky with a burning torch.

Low and behold, I do some research and find an awesome painting by Sebastiano about Phaeton, the son of the Sun god Helios who cannot control the chariot and is struck down by Zeus. Perfect composition and subject matter upon which I am basing my own Chariot crash. 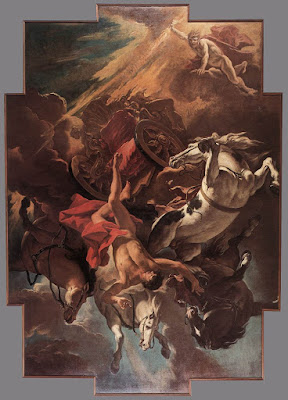 And then my own drawing, getting at more of an ambush on the chariot rather than a reckless crash: 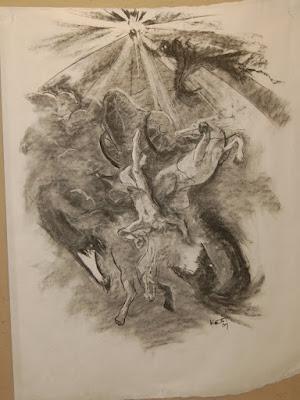 (It was awesome to draw large, with vine charcoal, and just focus on composition/ form/ space/ light/shadow/ etc....)
Posted by Unknown at 11:56 AM No comments: 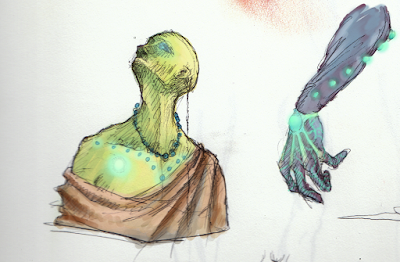 Fair amount of sketching, not much worth showing.

Once I got in the groove these two emerged. I did a quick paintover in photoshop to play with the idea of lights fused with the figure. Not sure I got there- the hand looks a little robotic.
Posted by Unknown at 8:36 PM No comments:

From now on, I will devote this blog entirely to what concerns my IP project (though it has always been 95% IP related anyways).
I am using the Bedroom/ kid/ Nightmare sculpture as a point of inspiration for building a body of narrative works. Using the time-tested "Quest" story with a little bit of "Voyage and Return" (both types covered well in The Seven Basic Plots), my story goes a little something like this:
A small boy has the Last Light, the key to saving the world.
Pretty basic. Nothing crazy in raw form. Then again, "Frodo has the ring and must destroy it to save the world," or "Harry Potter is the Chosen One, and is the key to defeating Voldemort," or "Paul Muad-dib is a messianic figure for the people of Dune" don't sound so crazy in raw form either....
For my story, I am naming my main character Balder. Balder is a Norse God of light, benevolence, and innocence. In addition to sounding good (linguistically), I think it hits on the symbolism of who I want this character to be in many different ways.
Balder has the Last Light, and will enter another world (think of something like Alice in Wonderland or Narnia) where the dark powers in the world are extinguishing every light in it. Building a world literally around Light and Shadow should offer some really exciting visual opportunities (bioluminescent lifeforms, surreally-lit environments....)
I have a good handful of ideas swimming around of where I want to take this. Enough to start painting and drawing and trying to populate what "belongs" in this place he is going.
Balder is about to follow the Beast under the bed, and I am about to take my own plunge down the Rabbit-Hole....
Posted by Unknown at 8:44 PM No comments: 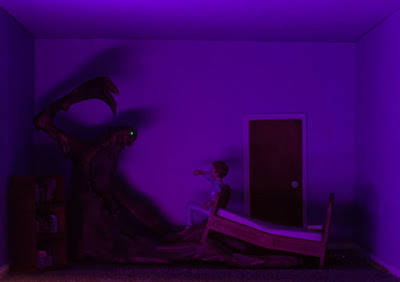 A UV light, 15 second exposure, and some photomanipulation....
Posted by Unknown at 8:56 PM 1 comment: 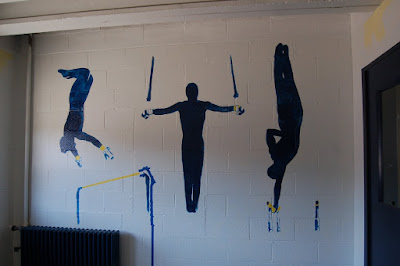 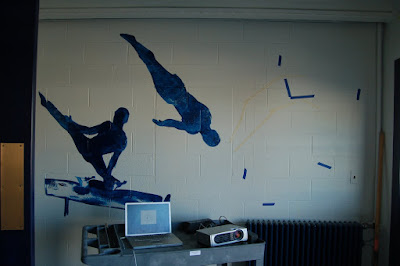 In progress shots of the mural for our team's facility expansion. This is in the main entrance on both walls. These are still very much in-progress shots, but you can see how once the figures get dark with a couple of coats and the maize paint gets added, it will hopefully look pretty snazzy.
Using my laptop (which is on life-support at this point) and a Sony projector. Occasionally masking parts with painter's tape to get extra clean lines (eg, for the high bar)....
Posted by Unknown at 3:15 PM No comments: