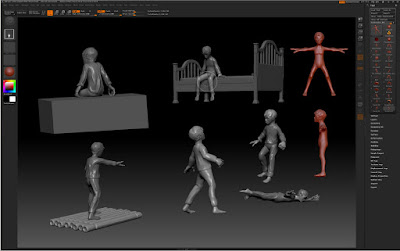 Pushing the 3D work to try and get my final set of files to the printer before I leave for Vegas....
Posted by Unknown at 10:32 PM No comments:

For those who like a dose of Gymnastics every now and then, here (:35 seconds in) is the debut of my new vault at the Penn State meet last weekend (Yurchenko 1/2 on Rudi).
Posted by Unknown at 11:45 PM No comments: 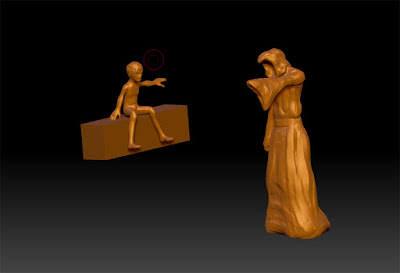 Too many tasks looming ahead would be easier if my sculptures were already printed, so I am turning my attention now to preparing my final set of characters for a 3D print. Progress from tonight includes the figure for Diorama #5, and Balder's pose for Diorama #4.

Also, I decided exactly what I want the final scene to look like. I think I am going to recreate Balder's bedroom (from diorama #1), but give it everything a coat of white/ cream paint, and light it brightly from the top, ditch the monster, sit Balder on the bed, etc. etc. <--- I'm kind of trying to go for a hazy dreamlike "back to reality" moment where the real world begins to materialize again.

Also (also), our team is competing in Iowa this weekend, which means from Friday 3pm till Sunday 4pm I'll be gone, and most likely exhausted by the time I get back (9 hour bus ride each way, cool.) But hopefully during this time I can get some smaller/ non studio tasks done- 2nd draft of my thesis, do some brainstorming for lighting, try and decide on titles for the pieces....
Posted by Unknown at 10:46 PM No comments: 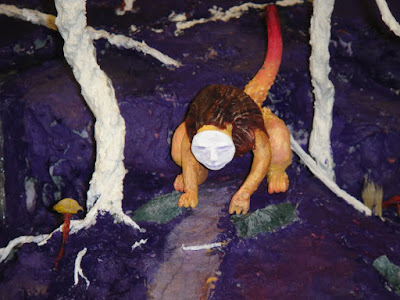 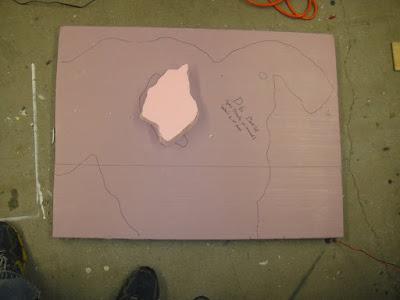 Diorama 6 Base - This one will be a lake surrounded by tall, tall cliffs 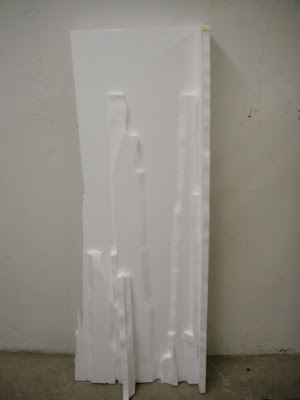 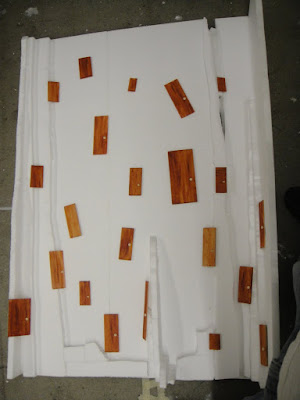 ...cliffs which will then be covered in paper mache and doors

I'll have pictures of dioramas 6 and 4 tomorrow. Progress is slow, but steady. Everything that I want to do takes longer than I anticipate. Getting home from practice at 7 didn't give me as much time as I wanted up on North Campus. BUT, I did manage a trip to Home Depot to get an extension cord and duct tape (among other things), both of which I think will be invaluable to my progress.
Why did it take me this long to buy duct tape?! Anyways, photo update shows the last tapestry (I used the reference photo from the previous post to generate the image):

Our home match this weekend might has well have been an away meet with all the work I was able to (not) get done, what with parents coming in town, going to dinner, and the meet itself on Sunday afternoon absorbing both the entire day and the entirety of my energy.

Still, I got up to the ol' studio Friday night, and finished up the tapestries today. I have two pictures for you: 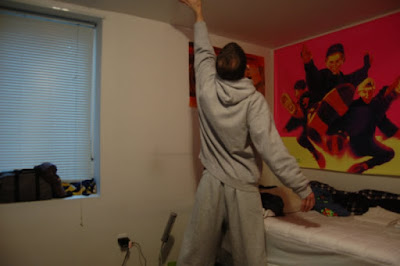 Embarrassing reference photo of myself that shows my commitment. 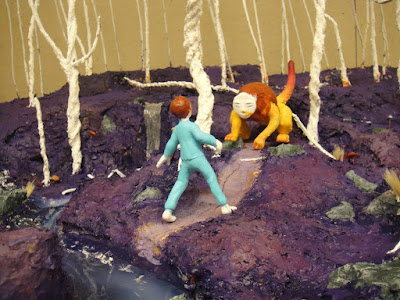 Figures positioned in the 3rd diorama after a rudimentary base layer of painting. Sweet!
Posted by Unknown at 10:53 PM 2 comments: 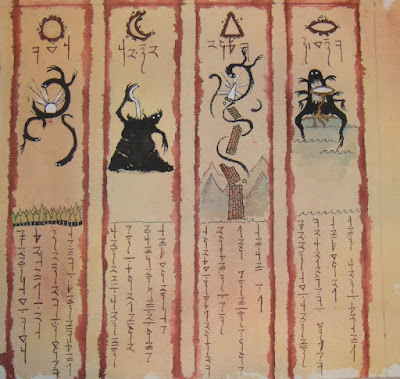 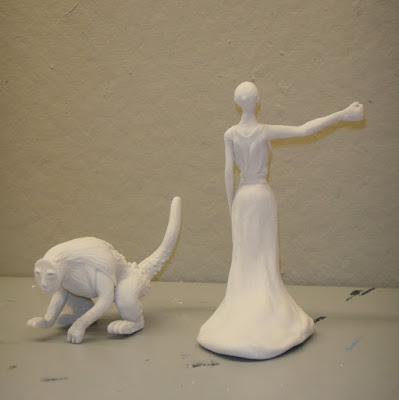 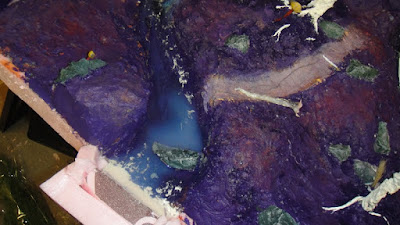 Liquid Plastic (Fake Water) poured in layers in the creek sections of Diorama 3 (forest)
Posted by Unknown at 7:18 PM No comments: 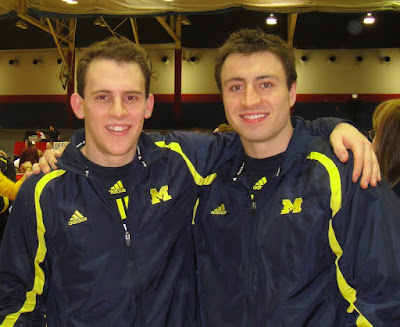 
So I got back yesterday afternoon from our first meet in Chicago (that's me and fellow 5th year senior Ryan McCarthy). If you're interested, you can see my Floor routine here (it's 4:20 into the clip).

It was awesome for me to compete again (it's been almost two years for me, since I redshirted last year), but the team finished a frustrating second place. We had a very rough meet, though, and are all ready to train hard and build over the next couple of months to realize our potential.

On the art side of things, I got to go to the Art Institute and checked out the Thorne Miniature rooms exhibit. The rooms themselves are incredible in their attention to detail and accuracy, but what I was most interested in was the illusion of light/ space and the presentation of the rooms. Here are a couple of observations:

1. All the rooms relied on "sunlight" coming in through windows to light them. This gave a very natural feel, and the constricted openings of windows/ doors allowed lights to be easily hidden: 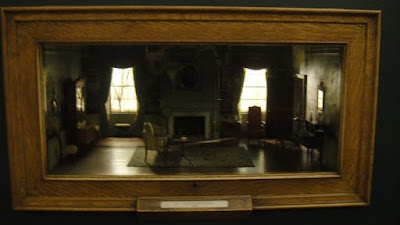 2. Beyond the windows, the landscape backdrops were often suggestive/ not rendered up very well. This doesn't matter, though, because you don't pay attention to them. Actually, it may help, naturally putting your attention towards the room itself.

3. Stairways that turned and went around a wall/ through a ceiling were a very successful way to extend the space of the piece beyond the constraints of the box.

I kept leaning as far as I could to try and see if they used dome backdrops, curved backdrops, if they used wood or canvas or what to paint on, what kind of lights they used. All of them were so well concealed, though, that it was really tough. However, this Japanese interior/ exterior was the one room that "failed," (to my advantage) in that it exposed its construction pretty easily. I could see the stapled canvas backdrop and the positioning of the light: 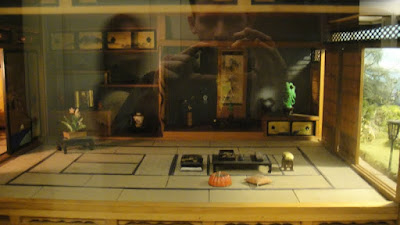 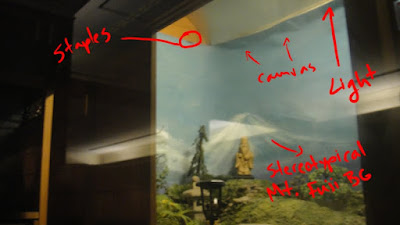 For the presentation of the rooms, I thought the frames were very elegant but simple (they had kind of an unfinished wood look), and there was a subtle but very important ledge hugging every wall of the exhibit, allowing young ones to peer into the boxes more easily. This will most definitely be an addition to the wall I will build for my final installation.

I came home with a lot of ideas and some good sketches from the bus ride. I received fabric samples in the mail and have clear visions now for how to execute dioramas 4 through 6. I got some work done on pouring the fake water into the rivers of the forest last night, am picking up some rapid prototypes in about an hour, and finally feel like I am making slow but steady progress towards the end goal.
Posted by Unknown at 11:31 AM No comments: 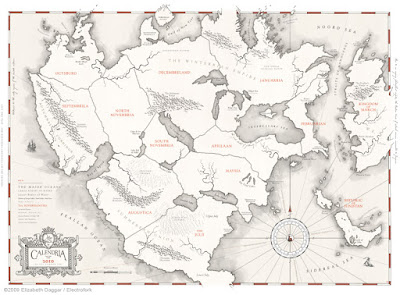 This is so cool:
http://www.elizabethdaggar.com/calendria2010/buy_the_atlas.html
It's an atlas using time/ dates to generate place. Nothing crazy conceptual or fancy, just fun.
Posted by Unknown at 4:24 PM No comments: 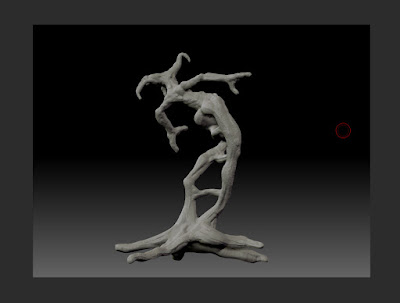 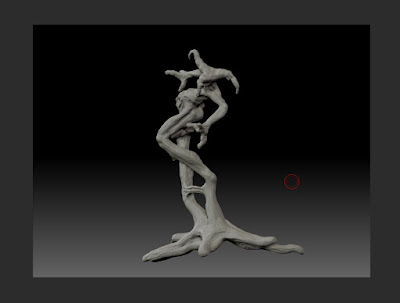 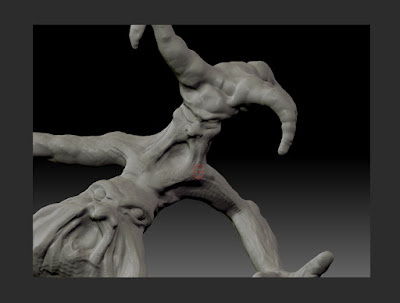 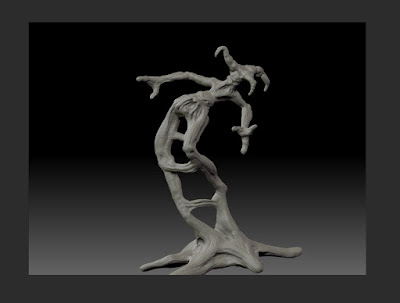 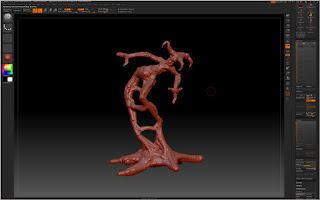 The new Zbrush is incredible... I was messing around with the new zsketching option and may have come up with the creature for my sixth scene....

Posted by Unknown at 1:51 PM No comments:

1. I installed my 1st diorama at Work last night, and did it in under 2 hours, which is at least twice as fast as the first time I installed it. This is really good practice for my final installation and gives me the confidence that, if necessary, I can construct my own wall to install the final narrative in without too much trouble.

2. The epoxy putty seems to be working really well for filling in the cracks of the paper mache.

3. I painted a wash on a small portion of the forest floor, and there was no shrinkage/ cracking! I think the last time I painted on it, the celluclay wasn't fully dry.... Hopefully we're clear of that problem now, I can paint the forest over the weekend and have photo updates on Monday.
Posted by Unknown at 8:52 PM No comments:

I went up to my studio today to get my first diorama for installation at Work, and the cracking on the forest scene is worse than ever. This is starting to really stress me out- I don't know how I'm going to pour the water for the rivers if I can never (effeciantly) seal off the river channels....
Posted by Unknown at 1:57 PM No comments:

Just a good quote for myself that I found:
"You need to stop thinking about ends and think of processes. " -Robert Genn
Posted by Unknown at 12:14 AM No comments: